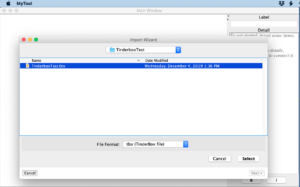 The most important feature of the Condensr (immediate detail in a fixed right pane) is now also available in a newer version of Tinderbox. So this might be a provisional substitution for users who haven’t yet received the approval of a friend to use our independent software. However, to use Tinderbox like the Condensr, requires to keep clear of the rich distracting décor, and to try not to get one’s items captured by neighboring items into hierarchical constructs.

But users’ preferences and styles vary, so it may well be that the completely different thinking style of Tinderbox (see a more detailed discusssion here: “Inspiring or distracting?”) suits you. Then: happy trails, and thanks for visiting!

More: In the introduction video from 2013, I said “I do not know any existing mappping application that enables such immediate detail view, except some that dont’t work reasonably with non-hierarchical floating topics, or some that don’t allow imports.” When I encountered the new Tinderbox version I thought that I had to alter this passage. But after the first few tests it became clear that Tinderbox, too, is at odds with non-hierarchical topics, in that it attempts to quickly group them somehow (“composites”) when coming too close, and you need to repair this by Edit > Break Composite (no rightclick menu!).

Note that the new importer is currently only available in the .jar distribution file, not in .dmg or .msi.

Try a demo in your browser.

Also note: This site uses Akismet to reduce spam. Learn how your comment data is processed.